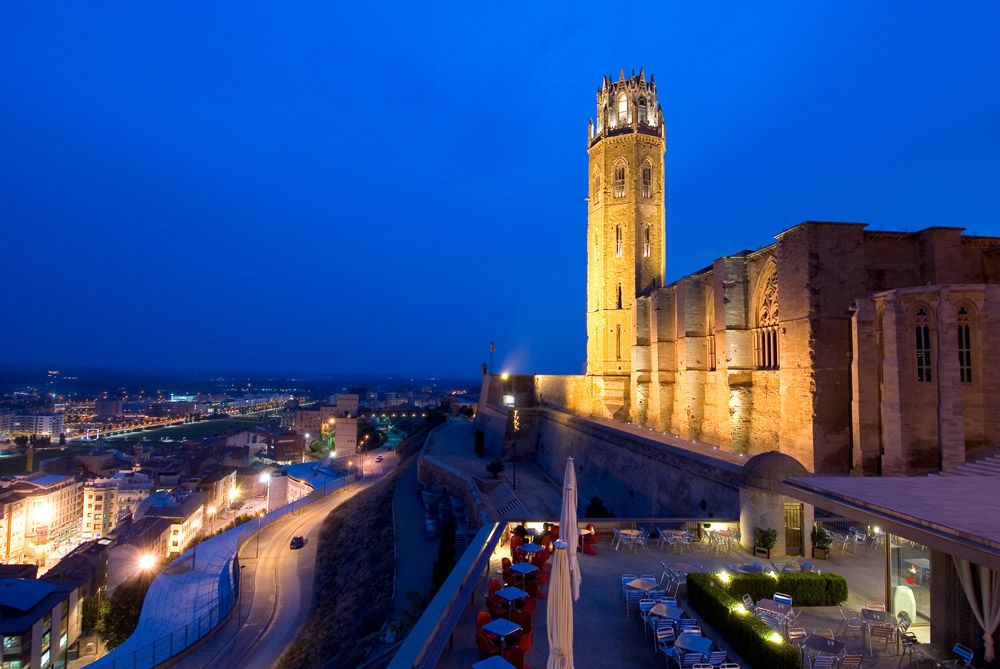 Lleida is a city of 140,000 inhabitants that is located in Catalonia's Central Depression. It is the capital of both the comarca (local district) of El Segrià and the Vegueria of Ponent. It is also the head of its judicial district and the seat of the Bishop of Lleida. This is a capital with an important historical, cultural gastronomic and commercial legacy ... which you will enjoy discovering. The city offers many opportunities to discover its history and culture via its monuments, the most important and emblematic of these being its Seu Vella (old cathedral), a Romanesque-Gothic building that dominates the city. The Castell del Rei (King's Castle), the Knight Templar Castle of Gardeny, the Paeria Palace (the seat of the city council), the former (Gothic style) Hospital of Santa Maria (which currently houses the Institute of Lleida Studies), the new (baroque style) Cathedral of Lleida, the Art Nouveau buildings and the medieval churches of Sant Llorenç and Sant Martí are some of the other historic buildings that visitors are recommended to discover. The Diocesan and Local District Museum of Lleida, the Jaume Morera Art Museum, the La Panera Art Centre, the Roda Roda Museum (which exhibits vintage cars and motorcycles) and the Water Museum also form part of the wide range of cultural spaces of great interest offered by the city. As for natural spaces, there is the La Mitjana river park, the channelled section of the River Segre and the Camps Elisis Park, all of which invite pleasant walks. As Lleida is a well-connected capital, you can leave the city by the C-12, which will take you to Balaguer in only 26 km. This is a fast, busy road with many straights that runs through dry land scenery. 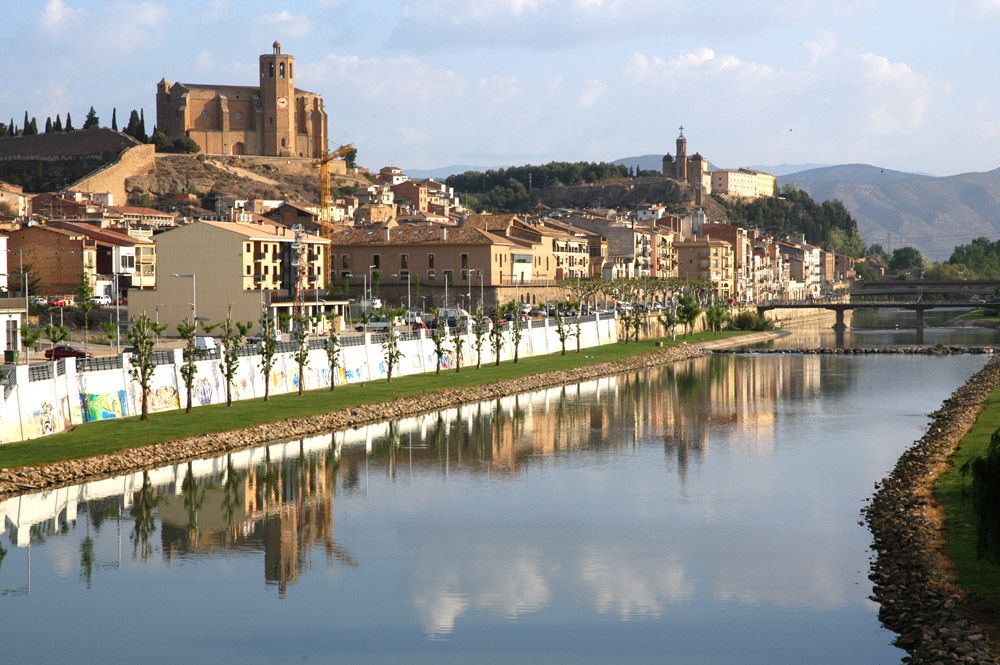 Balaguer, the capital of La Noguera, has around 17,000 inhabitants and is the second largest settlement in the province. The town’s most outstanding attractions include the Gothic-style church of Santa Maria, the shrine to the Holy Christ, the convent of Sant Domènec and the former female monastery of Santa Maria de les Franqueses. As well as these religious buildings, other interesting sights include: the majestic Plaça del Mercadel square, the remains of Castell Formós castle, the Gothic walls, the (archaeological) Museum of La Noguera and the rather curious Centre for Interpreting the Gold of the River Segre. It is easy to visit these spaces as you will find them along the way. You will then have an insight into Balaguer and its history before taking the C-13, which will take you the 33 km to Fontllonga, a village associated with Camarasa. This is an enjoyable road which passes through a landscape dominated by reservoirs and which will take you into the Montsec mountains. Continue along the C-13, through what is an extremely attractive setting, for about 29 km as you cross El Montsec on your way to Tremp. However, before arriving there, you will ride past the Baronia de Sant Oïsme; this is a small group of buildings dominated by the Romanesque church of Sant Bartomeu and the remains of what was once the castle of Sant Oïsme, with its unique round tower. 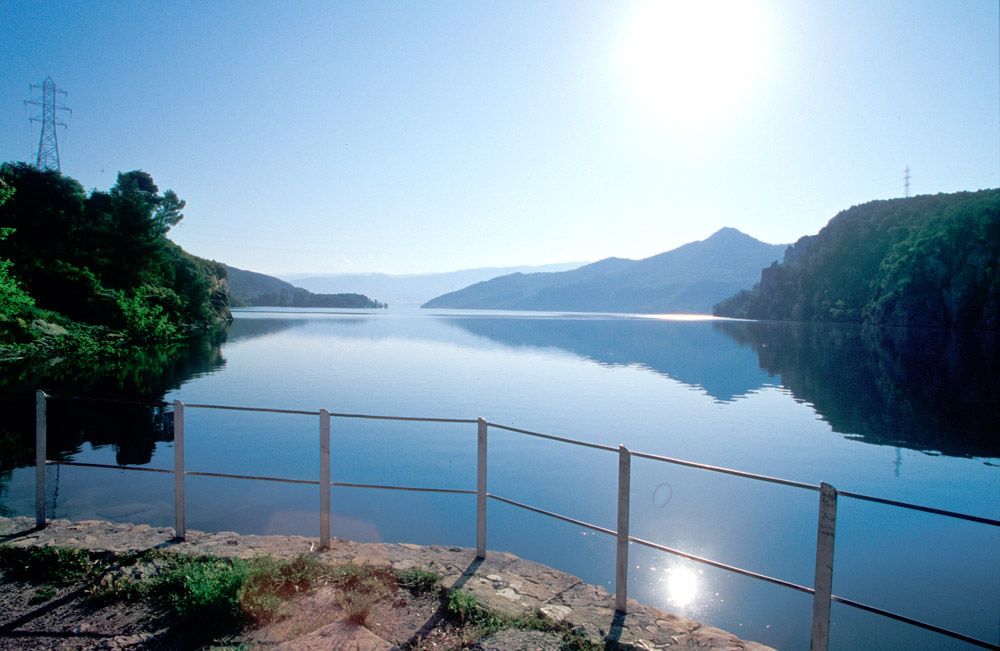 Tremp is the capital of the comarca of El Pallars Jussà and has around 6,300 inhabitants. The municipal area extends across the Catalan Pre-Pyrenees, from the River Noguera Ribagorçana water basin in the west to that of the River Noguera Pallaresa in the east. The central nucleus of this municipality is located on a small raised plateau within the water basin of the same name, at 468 metres above sea level. The Tremp Basin, or Conca Deçà, is a natural district bordered by the sierras and mountains of Montllobar (1,125 m), Lleràs (1,678 m), Comiols (1,356 m), Sant Gervàs (1,834 m), Boumort (2,070 m) - with its rich fauna (including deer, chamois, vultures and bearded vultures) - and Montsec d'Ares (1,678 m). Continuing along the C-13, you will cross the Sant Antoni reservoir and a stretch of Pre-Pyrenean countryside. You should then go on for a further 13 km, along a well-surfaced road, until you reach La Pobla de Segur.

At La Pobla de Segur, a municipality in the comarca of El Pallars Jussà, you can stop to take on liquids and relax. Here, it is well-worth visiting the Art Nouveau style Casa Mauri and the River Rafters' Space to discover who the rafters were, their history, and the difficulty of their work. You will then cross this area from the north-east to the north-west, passing through its centre, as you follow the N-260, which shares part of the trajectory with the C-13. This road crosses through the centre of La Pobla de Segur and when it reaches the southern end of the village, having crossed the River Flamisell, it follows the right bank of the river upstream, to Senterada and El Pont de Suert. You are recommended to follow the route along the N-260, but there is also the option of taking the L-503 into the Vall Fosca (Dark Valley) in order to enjoy its scenery, settlements and lakes before arriving at the entrance to the Aigüestortes and Estany de Sant Maurici National Park (where a spectacular cable car can take you up to Sallente, at 1,770 m, and Lake Gento, at 2,154 metres in only 10 minutes). However, as this road is a cul-de-sac, visitors are recommended to return to the N-260, along a well-surfaced stretch of road with nice curves, to continue on to Sort.

Sort, the small capital of the comarca, has 2,300 inhabitants and its nature and the River Noguera Pallaresa as its main attractions. In this village, which is considered one of the key centres for adventure sports in the Pyrenees, you will find a number of curious places, including the Prison-Path to Freedom Museum, which forms part of the "Persecuted and Saved" project promoted by the Diputació de Lleida and remembers the escape routes that Jewish refugees used to flee through Catalonia during the Second World War. Sort has also recently become famous for its lottery centre (La Bruixa d'Or), where many people stop off to try their luck. At this point, you should return to the C-13 for a 14 km ride that will take you into the heart of the Pyrenees, following roads that offer curves, narrow sections and magnificent views. The next proposed stop is at Llavorsí. 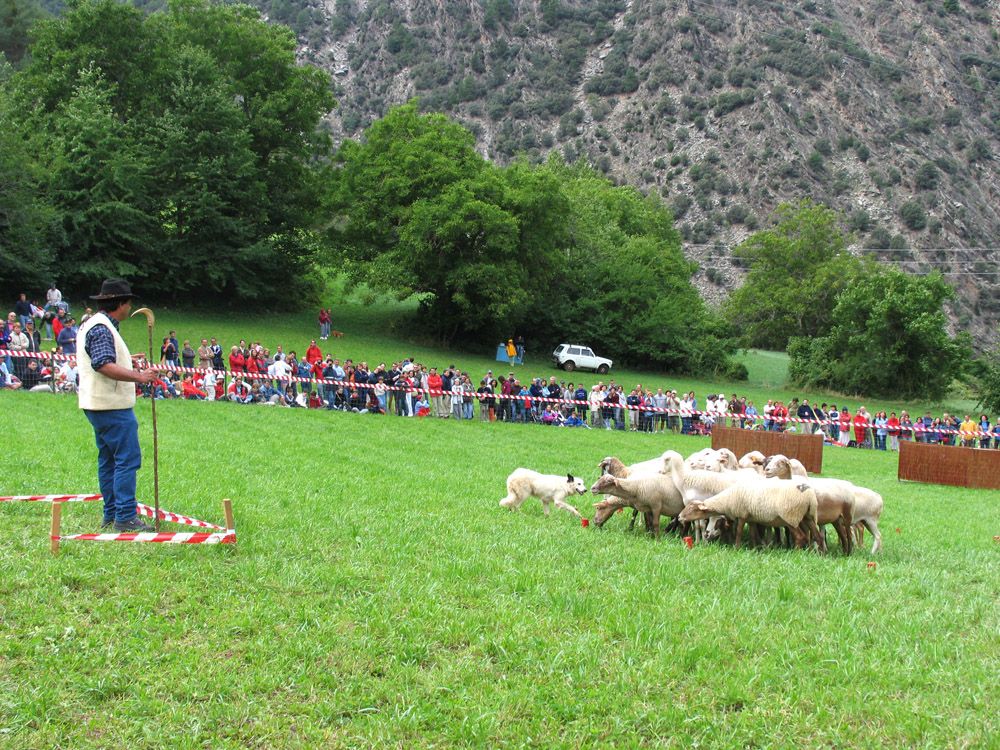 Llavorsí is a small hamlet, with just over 350 inhabitants, which stands on the River Noguera Pallaresa and at the head of the Àneu valleys. It is located in the Aurati valley and offers a beautiful panoramic view of the mountains that surround it. Active tourism activities such as rafting, canyoning and kayaking, among others, have given new life to a settlement which is well-known for the Sheepdog Trials, which are held every August, and for its rugged, mountain scenery, which is typical of the Pyrenees. You are now going deeper into the Pyrenees and will enter an area of mountain passes. Take the L-504, which is a local road, for a 20 km ride through Pyrenean scenery that will take you to Tavascan. The road runs passes mountain meadows and woodlands and runs through several small, picturesque villages, which include Esterri de Cardós, with its interesting Romanesque-style church of Santa Maria. 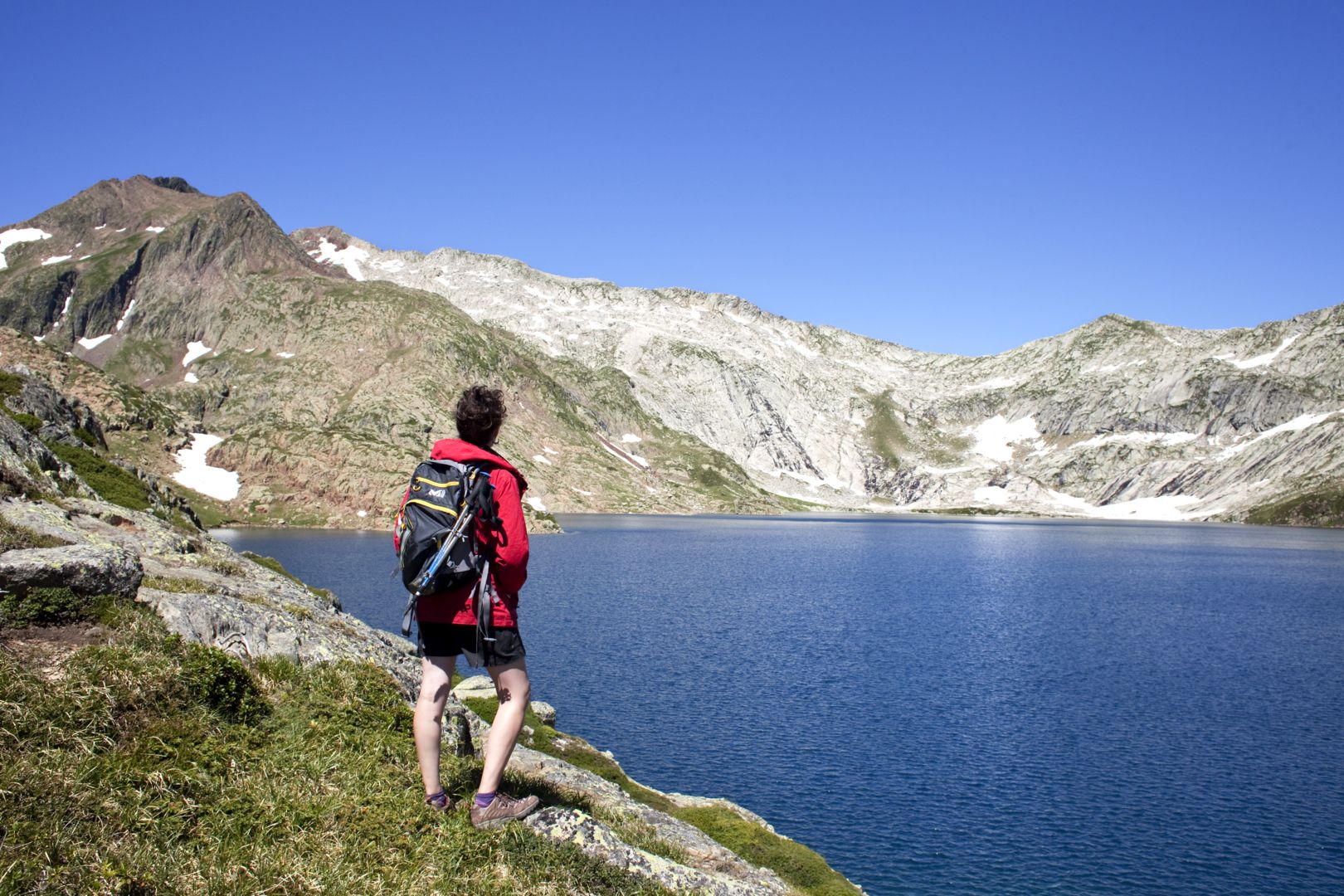 Tavascan is a hamlet with fewer than 100 inhabitants which belongs to the municipality of Lladorre and the comarca of El Pallars Sobirà. It is located to the right of the River Lladorre and to the left of the River Tavascan (the upper course of the River Noguera de Cardós), at the confluence of the two rivers. The village stands on a slope, at an altitude of between 1,106.9 and 1,154.5 metres, where it offers excellent panoramic views. This is a village of Pyrenean architecture, which offers visitors the outstanding church of Sant Bartomeu, a beautiful Romanesque-style bridge, and also the rather curious sight of the underground hydroelectric power station of Tavascan. Going back the way that you came, after this minor detour, you will soon be back at Llavorsí. Once there, return to the C-13 for the last 20 km of the journey through the Pyrenees, heading north on your way to Isil. Along the way, and now in the Àneu valleys, you will find a number of typical Pyrenean settlements, which include Esterri d'Àneu: a pleasant village where you can visit the old centre, the Romanesque-style bridge, the parish church or the headquarters of the Ecomuseum of the Àneu Valleys, which was created to preserve the cultural and ethnological heritage of the area. 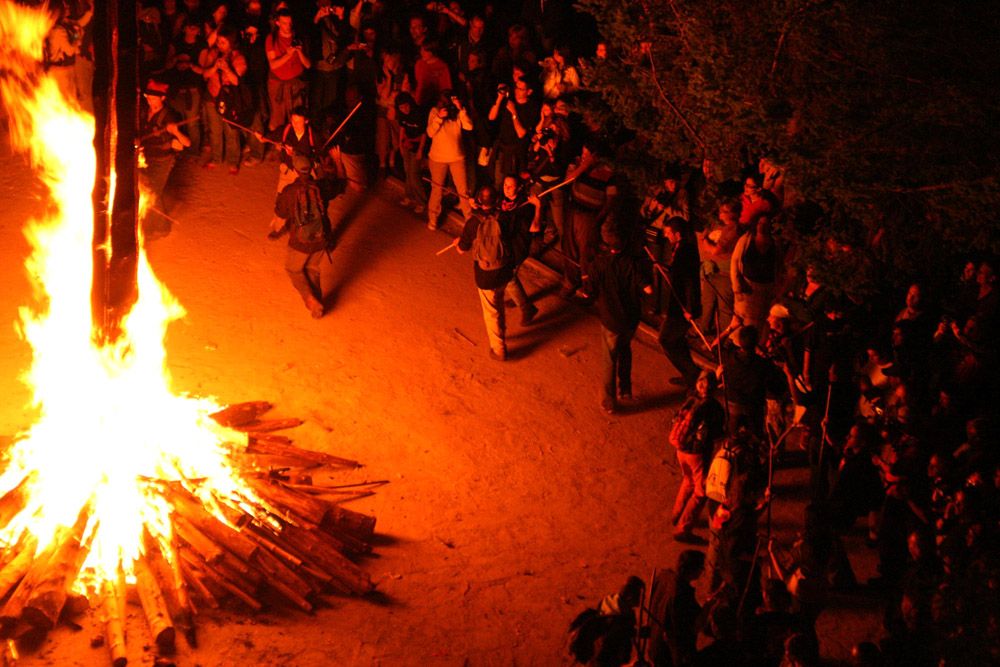 Isil is a typical Pyrenean village which is located in the municipal district of Alt Àneu, in the comarca of El Pallars Sobirà. It stands on both banks of the River Noguera Pallaresa, where it forms a type of island. On this island, it is possible to find the (late Gothic) Church of La Immaculada, the Rectorate or Abbey House, and (Romanesque-style) church of Sant Joan, which stands on the outskirts of the village. In fact, this is where the most famous "falles" (an age-old nocturnal festival of burning torches) festival in El Pallars Sobirà is held on Sant Joan's (mid-summer) Eve. It is at an altitude of 1,163.4 metres above sea level and is the perfect place at which to relax and unwind after an enjoyable day of motorcycle tourism. 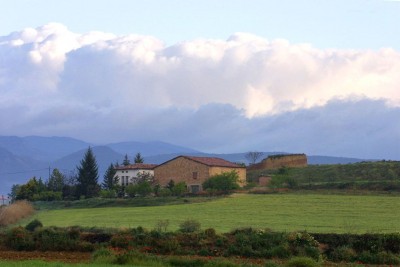 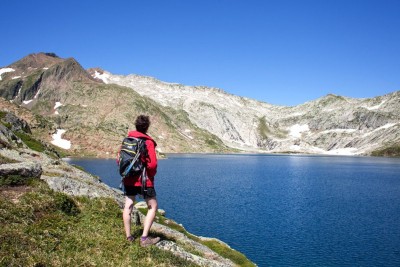 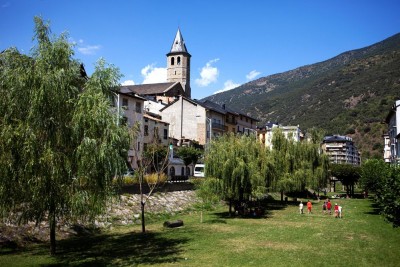 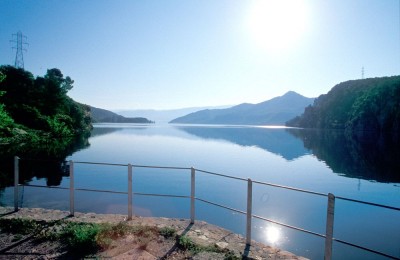 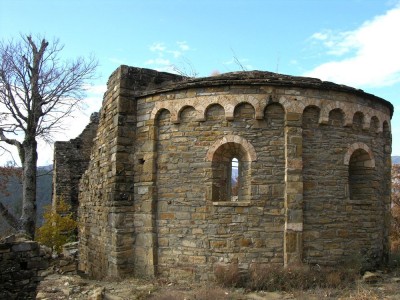 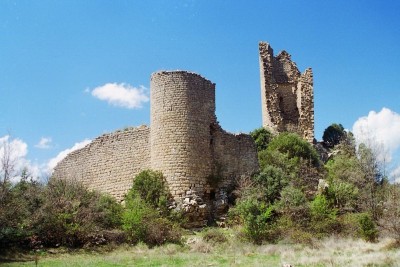 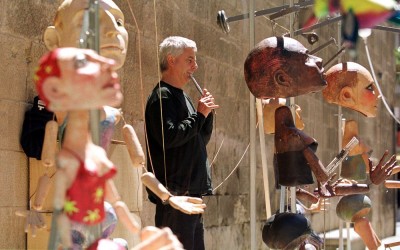 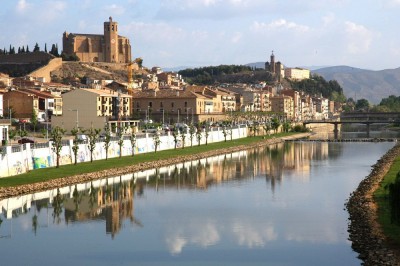 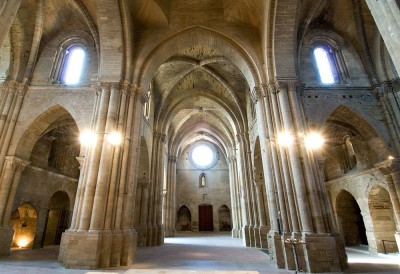 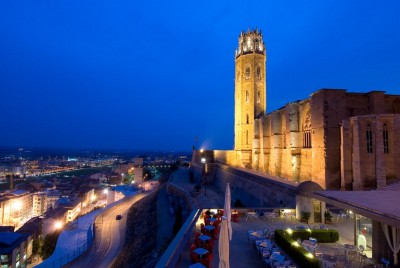 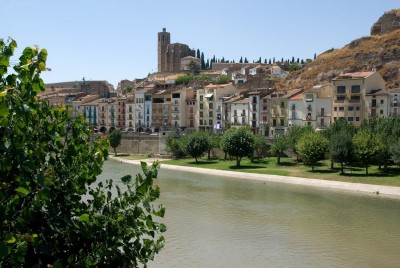 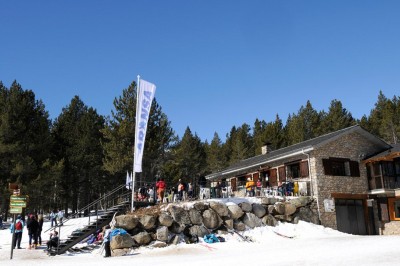 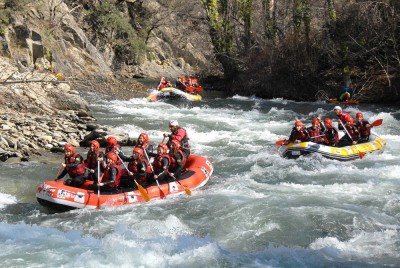 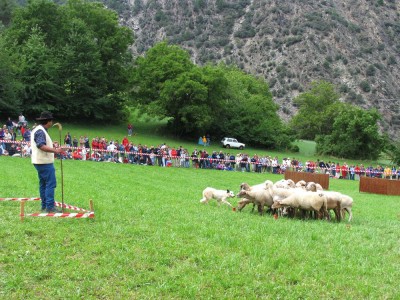 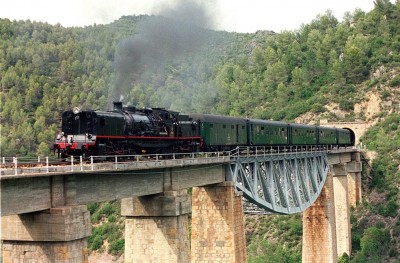 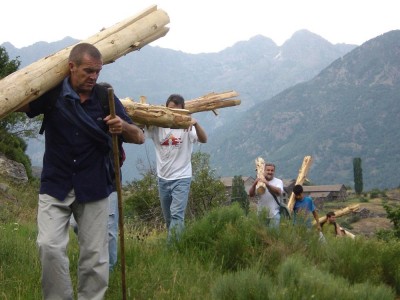 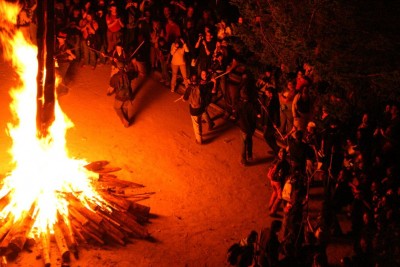 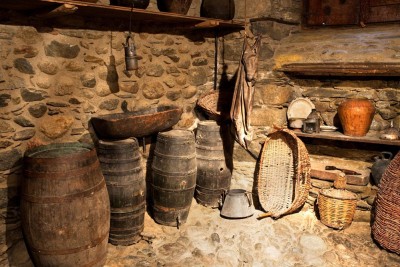